There’s no fee and no commitment. By joining, you’ll allow us to reach out to you with occasional, relevant information as Hanna Perkins continues its mission to support healthy emotional development.

The Hanna Perkins alumni network is open to: 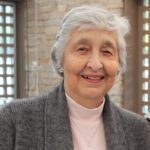 After nearly 50 years working with children and parents at Hanna Perkins School, Child Psychoanalyst Ruth Hall retired in June 2019. She was honored at a party at Nighttown.

Hall began at Hanna Perkins in 1972 as a therapist, working with parents of preschoolers using the Hanna Perkins practice of “treatment via the parent.” In 1980, she joined the faculty … [See photos and read the rest]

Jordan Javier, Director of University Hospitals’ Rainbow Center for Women & Children, is the first member of the Hanna Perkins board of directors who was also a Hanna Perkins student.

“But that’s not happenstance,” he says. “I always knew it would happen because Hanna Perkins was an important part of my upbringing.”

Javier attended Hanna Perkins preschool and kindergarten in the early 1980s at its former University Circle location, and his memories of it are what you might expect. He remembers waiting his turn to ride a red bike. He remembers his family helper was Beatrice “Bunny” Griffin; when he met her again as an adult just a few years ago, he confirmed his recollection … [Read the rest]

When I entered the Hanna Perkins preschool in the 1970s, I was more than a little afraid. I’m sure I clung to my mother as you might to a tree in a tsunami. My father had just died, and throughout my childhood a separation or an unfamiliar place would often stir up a tragic feeling.

The first thing I remember about Hanna Perkins is that I had no need to hide such feelings there. Like the big world into which I was taking my first small steps, the feelings themselves were very big, sometimes unpredictable, and “hard to manage,” as I recall some preschool teachers putting it. They understood feelings and honored them by acknowledging them, and by granting a child a little bit of sovereignty … [Read the rest]

What do you think?