Spring in the school garden 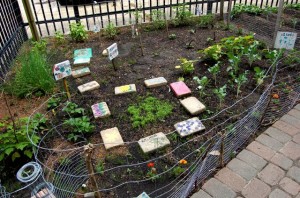 The growing season has begun in earnest, and the children at Hanna Perkins School have been making the most of it in the school’s garden.

The garden encompasses both a vegetable garden and the Hanna Perkins Butterfly Garden – a gift of the Hershey Foundation.

Children have been cutting daffodils to decorate their classrooms, notes Laura Cyrocki, a teacher at Hanna Perkins and manager of the school kitchen as well as the garden.

Preschoolers have been pulling last year’s dried and dead stalks and stems out of the garden and contributing them to the compost pile – which is mixed with all of the kitchen’s compostable material, turned, finished and added back into the garden to enrich the soil.

The kindergarteners also have been observing the garlic they planted last fall. In January they observed tiny green shoots, which are now knee-high (to a kindergartener) leaves. Before leaving school for the summer, they will harvest the garlic heads to take home.

Since February, children also have been observing seedlings that they planted under growlights. These are now

ready for transplanting in the garden and eventually will grow produce that is used in the healthy meals prepared in the school kitchen.

Students are also making good use of the paved path in the butterfly portion of the garden for riding bikes during their time outside.

Meanwhile, Cyrocki is maintaining the wildflowers and other plantings that attract butterflies and serve as hosts for caterpillars in the Hanna Perkins Butterfly Garden.  The school’s Parent/Toddler group is also involved, raising Painted Lady butterflies for eventual release in the garden.

In a previous blog post, Cyrocki – who earned a B.S. degree in botany – explains why gardens are so effective with young children. They help children to create a connection with the world around them, and also provide important insights about the entire lifecycle that are just right for the developmental stages of children between the ages of birth and 6.

Finally, neighbors are pitching in to help maintain the garden through a small area that has been set aside for community plots. Cyrocki says all of the plots have been claimed for the year, with community gardeners paying a nominal fee to use the facility and its timed sprinklers, and support for overall gardening activities.